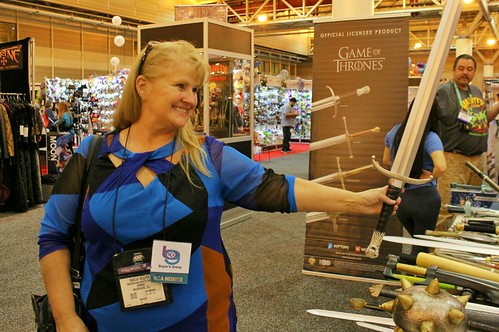 The 2018 Halloween & Party Expo was definitely heavy on the Halloween, showcasing costumes everywhere you turned.

As soon as stepping inside the convention hall in New Orleans, displays featuring the latest offerings from the likes of Rubie’s Costume Co., California Costume Collections, Costumes USA and Dreamgirl were front and center.

What’s going to be big for Halloween 2018? Let’s see what the experts have to say.

With pop culture acting as the biggest influencer in costuming, licenses from blockbuster movies and television shows remain a key component in Halloween trends. Howard Beige, Executive Vice President of Rubie’s Costume Co., said late 2017 hits “Star Wars: The Last Jedi” and “Justice League” will remain strong influences in 2018, noting both Wonder Woman and the Flash as big looks this year. Also, with “Star Wars: A Solo Story” due out in May, the Star Wars phenomenon isn’t going anywhere.

“This is the first time in history between two Halloweens, we will have two Star Wars movies,” said Beige.

As far as continuing trends, Beige said look for strong female characters, such as Wonder Woman, The Wasp, Supergirl, JoJo Siwa, Rey and Princess Leia, to stay on trend, as well as the evil clown craze inspired by 2017’s “IT.”

In the retro department, Beige said everyone’s favorite Hogwarts crew is coming back in style. “Harry Potter is stronger than it has been in many years as the original audience that saw these films in the early 2000s are now causing a resurgence for themselves and their children,” Beige said.

DIY’ers and the return of horror

Party & Halloween Retailer recently asked readers which product category saw the biggest uptick in sales in 2017 and the top answer was costume accessories, which further cements the theory that costumers want unique looks. They are using accessories to accentuate partial or full costumes or using accessories to create their own look from scratch.

That sentiment was echoed at HPE. “Moderately priced costume kits and accessories with a clever twist seem to be answering the DIY call,” said Chris Guzman, Sr. Vice President of Sales and Marketing, California Costume Collections.

Hats, glasses, masks, wigs, make-up and wearable or handheld accessories were all prevalent on the show floor. “We also see continued growth in DIY and Mix-and-Match accessory programs,” Beige said. “The tween, teen and young adult population of the market are the biggest users of these programs.”

Both Beige and Guzman noted the return of horror. “We have seen a large amount of horror films in the last 24 months, which includes “IT” … thus creating a large increase in sales in all of the classic horror characters such as Freddie Kruger, Jason, Michael Myers and Jigsaw,” Beige said.

Guzman added: “The scary and spooky genre seems dominate the current zeitgeist with a string of horror movies and cable TV shows, ranging in topic from possessed dolls and murderous scarecrows to homicidal clowns and urban legends and internet folklore.”

Guzman expressed the need to “reimagine” traditional favorites, such as vampires, werewolves and witches for younger, progressive buyers. “Consumer tastes in Halloween costumes are leaning toward the dark and ethereal and the fun and weird,” he said. “Traditional Halloween character design doesn’t cut it anymore.”

In addition to horror, steampunk was another style in great quantity at HPE.

Quality wigs that last are essential for avid Cosplayers, as well as those many DIYers who want a special look, if even just for Halloween. In addition, the ability to change hairstyles on a whim is a growing want for younger generations, which further makes wigs a year-round seller.

Dreamgirl has entered the wig market with a new line, which was on display at HPE. Designer Janet A. Teller underwent an extensive training process, including traveling to China to learn about wig production – “It’s unbelievably complex,” she said – as well as spending months studying trends.

“In researching hair trends, colors and cuts and we realized this industry – the hair industry – has exploded,” Teller said. “Girls are wearing wigs on a daily basis, they are coloring their hair like never before and using different products that were never on the market before.”

Teller and her team studied social media, fashion and Hollywood to come up with a cutting edge line of colors and styles. “What we wanted to do include all the looks you see on Pinterest and Instagram and what the celebrities are doing into the mastery of what our factory can do, and combine those tougher and offer our retailers looks that have never been in the Halloween market before,” Teller said.

Party Starts Here!
Charlottesville, Virginia is a vibrant college town and is known for its amazing shopping experiences. Party Starts Here, a retailer providing Halloween and party merchandise,...
Popularity of Pets
What to expect in 2020 Pet humanization. This is a phrase that is becoming more common in the pet industry. Over the past 10 years,...