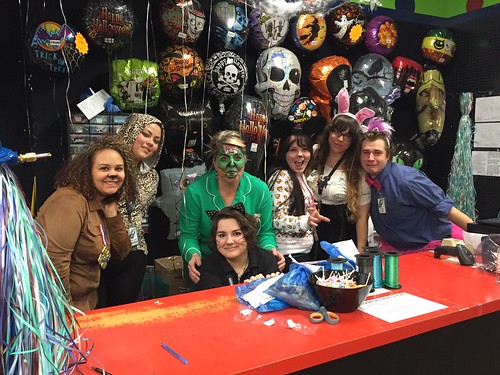 (Click on photo to see photo gallery of Partycraft)

The story of Greg and Kim Hunt is part fairy tale, part soap opera and 100 percent unpredictable. Even though they met and married nearly 40 years ago, the Hunts becoming co-owners of two Anchorage, Alaska party-supply stores would have seemed improbable, even to them, as recently as a few years ago.

Although more than half of Alaska’s roughly 740,000 residents live in the Anchorage metropolitan area, the state’s massive size and travel obstacles mean shopping at Partycraft is nearly impossible for more than 300,000 Alaskans.

With more than 15,000 square feet of retail space and the ability to stack large amounts of merchandise, Partycraft increased started an online store last year.

“Many of our customers live in remote areas; what we refer to as, ‘The Bush,'” Greg Hunt said. “This service would allow them to purchase product from a local shipper, which translates to lower shipping costs and faster delivery times. On Oct. 1, (2015) we debuted our e-commerce site kicking off a limited line of Halloween products.”

Q: I’m sure you hear this one all the time, but what’s party scene like in Alaska?

Believe it not, Alaskans love to celebrate. We party for everything. If we don’t have a reason to party, we just make one up. Take Fur Rondy, for example. This crazy winter festival has all kinds of goofy things going on from corn hole championships and frostbite runs to blanket toss competitions and a Miners & Trappers Ball. They even have a costume run. … Alaska is also blessed with a very diverse community, particularly the Anchorage area. This lends itself to year-round cultural events both indoors and out.

Q: What are your top-selling categories outside of costumes?

(Halloween makes up about 20 percent of annual sales at Partycraft.) As you might guess, balloons are up there. Our No. 1, though, is paper party, followed by balloons and then novelties. Halloween comes in fourth, and here is a surprising one: our cake/candy department comes is No. 5. Actually, it’s not that surprising to us. We have a great buyer in the cake and candy department who we affectionately refer to as “Aunt Mary.” She has been with Partycraft since the beginning. She is our assistant buyer and the heart and soul of the cake and candy department. But she is so much more. She helps with the purchasing and receiving. She is an excellent merchandiser. Her sets are immaculate. She is also a baker and candy maker. Go figure. What a lot of people don’t know though, is Aunt Mary is a closet actress. Really. (Check out Aunt Mary’s how-to video series on the Partycraft Alaska YouTube channel.)

Q: You do a lot of in-store and sponsored events. Anything unusual?

We also have tried in-store costumed events. A couple winters ago we held a “Spiderman Meets Frozen” event. We had all the characters in person for pictures and gave $5 Partybucks – yes, we have our own currency – to anyone who wore a costume. We expected 100 to attend. We lost count at 800, with lines out the door in 15-degree temperatures. We believe these types of events not only serve the community, but bolster our brand and sales. Many of our younger shoppers buy costumes for “play days.”

Bringing the Happy
When you think of Tribeca in New York City, you might picture industrial-turned-loft buildings like the Cary Building and commercial centerpieces like the New York...
Party Central
Courtney Creighton, owner | Party Central, Decatur, AlabamaHow long has the shop been open?Almost 22 years, but I just purchased in January 2018. I grew...